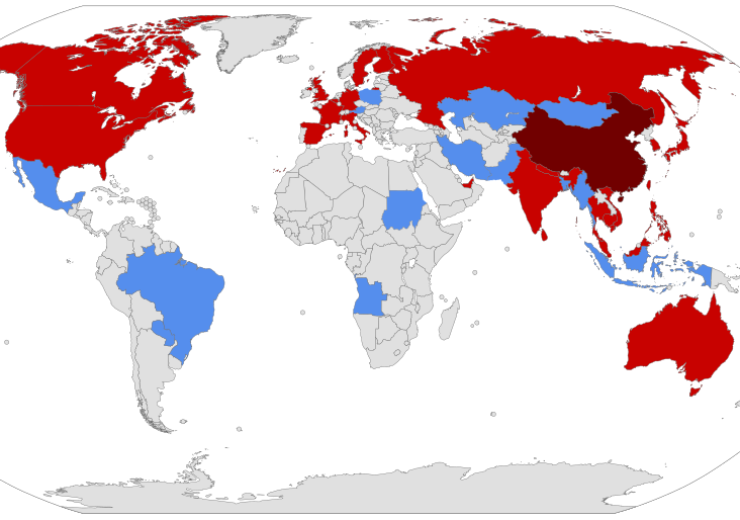 The novel coronavirus originated in the city of Wuhan in China, and has since spread to about 30 other countries around the world (Credit: Pharexia/Wikimedia Commons)

In just a few weeks since the first cases emerged in December 2019, the novel coronavirus timeline reveals how it has spread from the Chinese city of Wuhan to become a global public health emergency.

We take a look at how the infection has spread across the world, and what global health authorities are doing to halt its progress.

The first people with symptoms of a new flu-like illness are identified in Wuhan, China — but little is known about the cause or the threat to public health. These cases aren’t disclosed for several weeks.

31 December 2019: China alerts the WHO to pneumonia scare

Authorities in China alert the WHO (World Health Organisation) to several flu-like cases and an outbreak of pneumonia affecting dozens of patients in Wuhan.

US health authority The Centers for Disease Control and Prevention traces the origin of the virus to a seafood market in Wuhan.

Health officials in China announce they have identified a new infection belonging to the same family of viruses as SARS, MERS and the common cold.

The WHO reports a case of the virus in Thailand — the first confirmed infection outside of China.

The health ministry in Japan confirms its first case of the virus, found in a man who had recently visited Wuhan.

Chinese officials report a second person in Wuhan has died after contracting the coronavirus.

Health authorities in the US say they will begin screening passengers arriving from Wuhan at airports.

Authorities in China confirm the virus can spread from person to person.

The first case of the novel coronavirus is reported in South Korea.

More than 200 cases are reported in cities across China, and the country reports its third coronavirus death.

Several countries in Asia — including Japan, South Korea, Hong Kong and Singapore — begin screening passengers arriving from Wuhan, and set up measures to quarantine people who test positive for the coronavirus.

A man in Washington becomes the first confirmed case of the virus in the US.

Some virologists suggest the virus may have spread from wild bats to snakes, and then to humans — however, these claims have been disputed.

The number of confirmed cases in China increases to more than 500. The death toll rises to 17.

The WHO names the disease “2019-nCoV” and says it’s too early to declare the situation a global emergency — but adds it is undoubtedly a national public health crisis in China.

In an attempt to contain the virus, Chinese authorities impose a lockdown on the city of Wuhan and several other municipalities in the Hubei province. These travel restrictions are thought to impact about 57 million people.

US tech company Dimer introduces a germ-killing robot to disinfect airplanes and protect passengers from becoming infected with the coronavirus.

France confirms the first cases of the coronavirus to reach Europe, with patients in Paris and Bordeaux.

China lists 26 deaths and more than 800 cases of the novel coronavirus.

The Chinese government announces it will begin building a 1000-bed temporary hospital in just six days to treat infected people in isolation.

The first case of coronavirus in Australia is confirmed in a man from Wuhan who had travelled from the Chinese port city of Guangzhou to Melbourne several days earlier. Three further cases are reported in Sydney later the same day.

President Xi Jinping warns that the spread of the infection is accelerating, and the country is facing a “grave situation”.

The number of confirmed cases in China rises to 2,700. This exceeds the 2,494 infected with MERS — predominantly in Saudi Arabia — during the 2012 outbreak. About half of these cases are in the Hubei province, which has Wuhan as its capital.

The number of coronavirus cases in China surpasses the 8,096 recorded during the SARS outbreak of 2002-2003.

US pharma giant Johnson & Johnson announces it will begin looking for a coronavirus vaccine.

The Ministry of Health and Family Welfare in India confirms the country’s first case of the virus in the state of Kerala.

Russia closes its border with China in the Far East, in an attempt to stop the infection spreading.

WHO director-general Tedros Adhanom Ghebreyesus declares the coronavirus a global public health emergency, citing the growing number of cases outside of China.

US health secretary Alex Azar declares the virus a public health emergency. American citizens are urged not to travel to China.

The number of countries outside China with confirmed cases rises to 18.

The first coronavirus-related death outside of China is confirmed in the Philippines.

More than 300 people have died from the virus — the vast majority in Hubei — and the number of people infected hits 14,000.

The Coalition for Epidemic Preparedness Innovations (CEPI) receives £20m ($26m) from the UK government to work on a coronavirus vaccine. UK pharma company GlaxoSmithKline announces it will collaborate with CEPI on the project.

Some 3,700 passengers are quarantined on the Diamond Princess after 10 people test positive for the coronavirus aboard the Japanese cruise ship.

5 February 2020: British warned not to travel

The number of confirmed cases in the US rises to 12.

The US Food and Drug Administration (FDA) approves the emergency use of a novel coronavirus diagnostic test.

The virus reportedly kills Li Wenliang — a doctor “threatened” by the Chinese government for voicing concerns about the outbreak in the final days of 2019.

The coronavirus death toll hits 638, and more than 30,000 total cases are confirmed worldwide. The infection has reached 27 countries across the globe.

The number of infections aboard the Diamond Princess cruise ship rises to 61.

The global death toll rises to more than 800, surpassing the 774 killed by SARS.

With 910 deaths, the novel coronavirus surpasses the 858 killed by the MERS outbreak in 2012. The number of confirmed cases climbs to about 40,000.

Four more cases of the coronavirus are confirmed in the UK — bringing the total to eight. A GP surgery in the city of Brighton is shut down after a member of staff tests positive for the virus.

The UK government declares the outbreak as a “serious and imminent threat to public health”.

Millions are set to return to work following the end of the Chinese Lunar New Year holiday, but many schools and workplaces remain closed, and white-collar employees are told to work from home.

The number of worldwide deaths increases to more than 1,000 following the virus’ most deadly 24-hour period to date — with 100 people dying in a single day for the first time.

Two senior officials in Hubei are sacked over their role in combatting the spread of the disease.

A further 39 people – including one quarantine officer – aboard the Diamond Princess cruise ship contained in Yokohama Bay near Tokyo are confirmed to have the coronavirus, bringing the total to 174.

WHO director-general Tedros Adhanom Ghebreyesus announces the novel coronavirus should be called “Covid-19” – a name that doesn’t refer to a location, animal, individual or group of people.

The first case of the virus is confirmed in London, England, bringing the number of cases in the UK to nine.

Changes to the way the coronavirus is diagnosed leads to an increase of nearly 15,000 cases in the Hubei province alone – the biggest jump in confirmed daily cases so far. This brings the number of people infected worldwide to almost 60,000.

In the deadliest 24-hour period yet, 242 new deaths are also reported, pushing the total in China to more than 1,350.

This includes the first coronavirus-related death in Japan – the third in total outside of China.

Egypt confirms its first novel coronavirus case, becoming the first country in Africa to be affected by the outbreak.

The first coronavirus-related death occurs in France – this is also the first death anywhere in Europe.

Some 11,000 people are thought to have recovered from the virus – more than 1,200 over a 24-hour period. Researchers in China use a mathematical model to show the number of new infections declined between 13 and 15 February.

Taiwan becomes the third Asian country – and the fifth anywhere outside of mainland China – to report a death from the coronavirus infection.

For the first time, the number of recovered patients exceeds that of confirmed cases in China – 1,749 new cases were confirmed on 18 February, while 1,824 patients recovered.

Passengers begin to disembark the Diamond Princess cruise ship near Tokyo following a controversial two-week quarantine aboard the liner. More than 540 are thought to have been infected on the ship.

The total death toll rises to more than 2,000, while the number of confirmed cases hits 75,000 – the vast majority of both are still in China.

Hong Kong announces its second coronavirus death since the start of the outbreak, becoming the first country outside of mainland China to report multiple deaths.

Iran reports two coronavirus-related deaths in the city of Qom, near Tehran. These are the first deaths caused by the infection anywhere in the Middle East.

Two Japanese passengers who were on the Diamond Princess cruise ship die from the novel coronavirus. Local media reports suggests both were in their 80s and living with underlying health conditions.

While the international death toll increases to more than 2,100, the rate of new infections continues to decline – with only some 430 confirmed cases over a 24-hour period, compared to nearly 1,500 coronavirus recoveries.

A surge in South Korea leads to the number of confirmed cases in the country passing 200.

Two more people die from the coronavirus in Iran, bringing the total to four.

Italy reports a spike in cases – as the total number infected increases from four to 20. The country also confirms its first coronavirus-related death near Venice.

The total number of recoveries from the virus surpasses 20,000.

23 February 2020: Coronavirus surges in parts of Europe and Asia

A surge in cases in Italy brings the total confirmed cases to 79 in the country.

Officials in the UK reports four new cases, bringing the total number of infected to 13.

The number of cases in South Korea increases to more than 600. The country also reports three more deaths, bringing the total to five.

Four Indian passengers quarantined aboard the Diamond Princess cruise ship in Japan test positive. The total number of Indian people infected on the ship is now 12.

The Italian government puts quarantine restrictions on nearly 50,000 people in the Veneto and Lombardy regions in Northern Italy after the death toll rises to seven, and the number of confirmed cases increases to 229.

The US Centers for Disease Control and Prevention (CDC) states that there are 53 cases of Covid-19 in the country. The majority of these are people who recently departed the Diamond Princess cruise ship.

The number of cases increases to more than 800 in South Korea. The country raises its infectious disease alert to the highest level.

The confirmed death toll in Iran increases to 12, including four additional deaths reported today – although the country’s deputy health minister Iraj Harirchi is forced to deny claims that the government has concealed the true severity of the coronavirus in Iran.

The Japanese government asks schools to temporarily close – even if there are no confirmed cases on site.

The number of total cases in South Korea surges again to nearly 1,000. Two additional deaths are also confirmed, bringing the total to 10.

The total death toll rises to almost 2,700 across the world. The number of cases surpasses 80,000 worldwide, while the number of recoveries stands at more than 27,000.

The number of countries with confirmed infections in now 35.