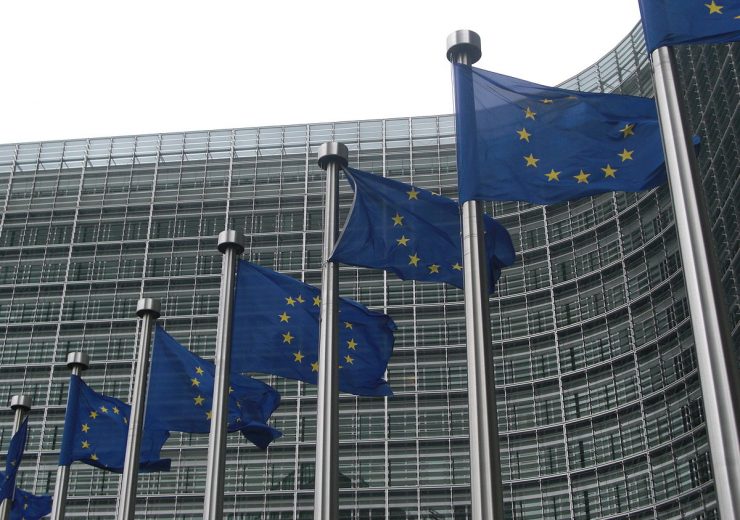 Flags in front of the European Commission building in Brussels. (Credit: Sébastien Bertrand/Wikipedia.)

GlaxoSmithKline (GSK) has received the European Commission (EC) conditional marketing authorisation for its Jemperli (dostarlimab) to treat a type of endometrial cancer.

The drug is indicated for women with mismatch repair-deficient (dMMR) or microsatellite instability-high (MSI-H) endometrial cancer, previously treated with a platinum-containing regimen.

Jemperli is an anti-PD-1 (programmed death receptor-1) antibody that works by binding with the PD-1 receptor and blocks its interaction with the PD-L1 and PD-L2 ligands.

It was originally discovered by AnaptysBio and was licensed to Tesaro, a US-based pharmaceutical company in March 2014.

GSK chief scientific officer and R&D president Hal Barron said: “Women with recurrent endometrial cancer, or advanced disease that has progressed on or after chemotherapy, currently have limited treatment options and a poor prognosis.

“Today’s approval of dostarlimab means that for the first time in Europe, these women will have access to a new, innovative and much-needed therapy.”

The EC approval follows the recent FDA approval of Jemperli for the same indication.

The European Medicine Agency (EMA) approved Jemperli is based on results from the GARNET clinical trial that enrolled patients with advanced or recurrent solid tumours.

The median duration of response (DoR) had not been reached, and the probability of maintaining a response at six months was 97.9% and at 12 months was 90.9%.

Anaemia nausea diarrhoea vomiting arthralgia pruritus, rash, pyrexia and hypothyroidism include the most common adverse reactions in the study participants.

Furthermore, GSK is evaluating Jemperli for endometrial cancer in earlier treatment lines and in combination with other therapeutic agents for advanced solid tumours.