Septic shock is the most severe result of sepsis – an overreaction from the immune system to bacterial, fungal or viral infection. As with other acute conditions, time is of the essence when it comes to treatment. But if a patient goes into septic shock, their chances of survival are slashed dramatically. It’s for this reason researchers still seek novel treatment options to improve mortality. Kim Thomas speaks to Neill Adhikari, an intensivist at Sunnybrook Sciences Centre at the University of Toronto, and Anders Perner, senior staff specialist and professor in intensive care at Rigshospitalet, University of Copenhagen, to explore some of the latest potential treatments and discover how septic shock is currently managed. 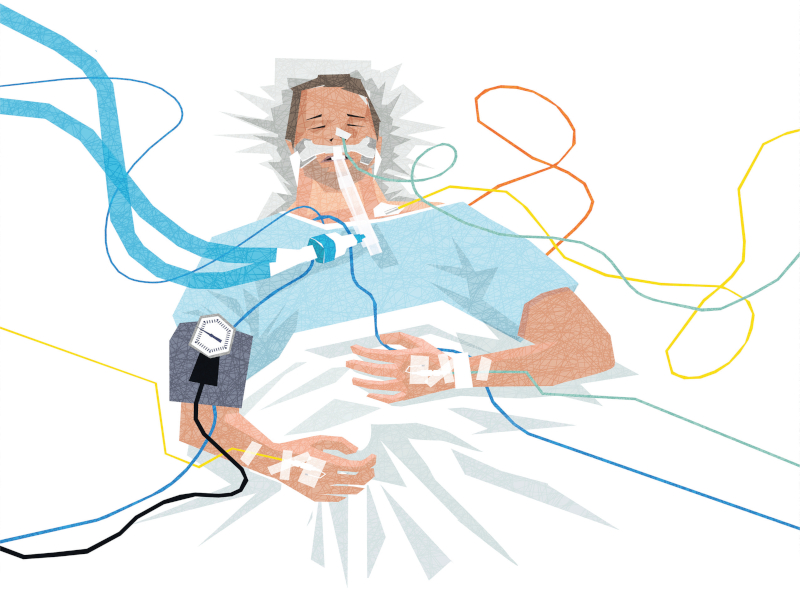 Sepsis, which occurs when the body’s immune system overreacts to a bacterial, viral or fungal infection, kills 11 million people a year worldwide. Left untreated, it progresses to severe sepsis, where the body’s organs start to malfunction as a result of lower blood pressure. Finally, it can progress to septic shock, caused by the body’s inflammatory response damaging the small blood vessels, leading them to leak fluid into the surrounding tissues, and affecting the heart’s ability to pump blood. The lower blood pressure (hypotension) prevents blood from reaching vital organs, causing organ failure.

Although mortality rates have declined significantly in the past 30 years, about 20% of people who contract sepsis will die from it. In cases where sepsis proceeds to septic shock, the mortality rate is about 40%. Septic shock is much more prevalent in intensive care units (ICUs), where patients are typically frail and elderly and may have chronic conditions, or have developed an infection as a result of surgery. One study found that, of 116 ICU patients with sepsis, 35.3% developed septic shock. Of those, 63.4% died.

“Some patients […] may just come in with a bit of confusion or delirium, which has a very wide number of causes.”

Although mortality rates have declined significantly in the past 30 years, this percentage of people who contract sepsis will die from it.

The continuing prevalence of the disease, combined with the high mortality rate, has prompted researchers to find new ways of tackling it. It is, however, a challenging task. There is no single diagnostic test for either sepsis or septic shock. Both, says Neill Adhikari, an intensivist at Sunnybrook Sciences Centre at the University of Toronto, have “consensus definitions”. In the case of sepsis, diagnosis relies on finding some evidence of organ dysfunction in a patient with a suspected or confirmed infection, such as problems breathing or low platelet levels. Key indicators that a patient has septic shock are the presence of high levels of lactic acid in the blood, and the need for medication to maintain blood pressure greater than or equal to a set target – often a mean arterial pressure of 60 or 65mm Hg.

Early diagnosis is not always easy

If sepsis is diagnosed early, patients can usually be treated effectively with antibiotics, IV fluids, and supportive care as needed for any failing organs. Early diagnosis is not always easy, however, because symptoms of sepsis – typically high temperature, chills, rash, rapid heart rate, rapid breathing, drowsiness and confusion – can be mistaken for other conditions.

“Some patients, particularly if they’re immune-compromised, because of a medical condition or because they’re elderly or frail, may just come in with a bit of confusion or delirium, which has a very wide number of causes,” says Adhikari.

If sepsis progresses to septic shock, then as well as continuing to administer antibiotics and intravenous (IV) fluids, clinicians will administer vasopressor medication to narrow blood vessels and improve blood flow. In some cases, says Adhikari, it is also necessary to remove the source of infection: “Someone with septic shock because they’ve got a perforation in their colon as a result of inflamed bowel or diverticulitis is not going to get better with antibiotics alone – they need an operation. Someone with septic shock because of pneumonia, where there is empyema – fluid around the lung that has become infected – will need to have that infected fluid drained.”

Yet there is still uncertainty about what treatments are most effective. While oxygen therapy, for example, is a standard treatment for ICU patients, there is concern, says Anders Perner, senior staff specialist and professor in intensive care at Rigshospitalet, University of Copenhagen, “that too little or too much oxygen may be harmful”. While clinical trials, he adds, have established a target range in which oxygen therapy is safe, it is still unclear whether patients with sepsis may benefit from a higher or lower target.

While patients with septic shock are normally treated with IV fluids, higher fluid volumes have been associated with harm in patients in the intensive care unit (ICU). Perner was part of an international team to publish a new study investigating whether lower levels of fluid would be as effective in treating septic shock in those patients. In the trial, 770 patients were assigned to the restrictive-fluid group (receiving a median of 1,798ml of IV fluid) and 784 to the standard-fluid group (receiving a median of 3,811ml). Outcomes were the same in the two groups, with 323 deaths in the restrictive-fluid group and 329 deaths in the standard-fluid group. In other words, reducing the fluid intake did not improve outcomes, but neither did it worsen them.

This is in keeping with a general trend in treating septic shock, says Perner, who says that care in the ICU has been based on certain untested physiological assumptions, or evidence from other conditions. Clinicians, he says, have carried out “a lot of interventions that had never been tested in clinical trials in patients with septic shock, and over the past two decades when we have tested everyday interventions, a lot of them have shown no benefit, and some actually caused quite marked harm.” Over time, he says, clinicians “have been doing less and less, as it has been shown to be difficult to improve the outcomes of these patients by doing more”.

Adhikari and his colleague Francois Lamontagne undertook an international randomised controlled trial to determine the effectiveness of vitamin C in treating sepsis and septic shock. There were good reasons to believe that vitamin C could be an effective intervention. In patients with sepsis, levels of vitamin C in the blood are very low, says Adhikari. Because vitamin C “has a number of roles in metabolic pathways in the body” including antioxidant properties that improve the function of neutrophils in fighting infection, it seemed reasonable to hypothesise that raising levels of vitamin C could improve the body’s ability to combat sepsis. It is also an essential ingredient in enabling the body to make its own vasopressors, he adds.

An animal study had shown promising results, as had a small placebo-controlled study in humans, where the patients given a high dose of vitamin C improved organ function faster over the first three or four days. There had also been a retrospective before-after study, which compared the outcome and clinical course of consecutive septic patients treated with intravenous vitamin C, hydrocortisone, and thiamine during a seven-month period with a control group treated in the same ICU during the preceding seven months. There were 47 patients in each group, and the mortality rate for the treatment group was 8.5%, compared with 40.4% in the control group.

In the trial led by Adhikari and Lamontagne, 872 patients with sepsis receiving vasopressor therapy in the ICU were divided into two groups, one receiving an infusion of vitamin C, at a dose of 50mg per kilogram every six hours for four days, the other receiving a placebo over the same time period.

Rather than improve patients’ chances of survival, says Adhikari, the high dose of vitamin C “increased the risk of a bad outcome”. In this case, a bad outcome was defined as either death at 28 days or being alive at 28 days, but with persistent organ dysfunction, with the patient either still dependent on the ventilator, or still receiving blood pressure medications or dialysis. This primary outcome occurred in 191 of 429 patients (44.5%) in the vitamin C group and in 167 of 434 patients (38.5%) in the control group.

It was, says Adhikari, an “alarming” result, and the data didn’t provide insights into the reasons behind it. Although the team had collected biomarkers from some patients, they found “no real difference” in biomarkers between the vitamin C and control groups.

The result is the latest disappointment in a series of disappointing trial results for sepsis treatments. While antibiotics remain essential to managing sepsis, there have, says Adhikari, been about 100 trials of other treatments designed to improve the body’s response to infection, and none has worked.

“Over the past two decades when we have tested everyday interventions, a lot of them have shown no benefit, and some actually caused quite marked harm.”

There have been this many treatment trials designed to improve the body’s response to infection and none has worked.

Perner believes the problem with some of the interventions tried is that physicians have misunderstood the body’s response. In evolutionary terms, humans have developed adaptive mechanisms for fighting infection, he says: “In the past two decades we have probably misunderstood some of these adaptive mechanisms and thought that they were therapeutic targets that we would try to normalise, but they were actually beneficial adaptive responses, and when you then try to normalise adaptations, you may harm the patient by doing so.”

As a result, Perner argues that we have now reached a “new normal, where less is more”. While personalised medicine is increasingly used in conditions such as cancer, all patients with sepsis have received the same care. He believes that the most promising areas of research now lie in subdividing patients with septic shock into smaller clusters of patients that “may benefit from more precision-based medicine”, which would take into account different types of infection and different types of host response.