How the smart wound dressing can help wounded soldiers recover 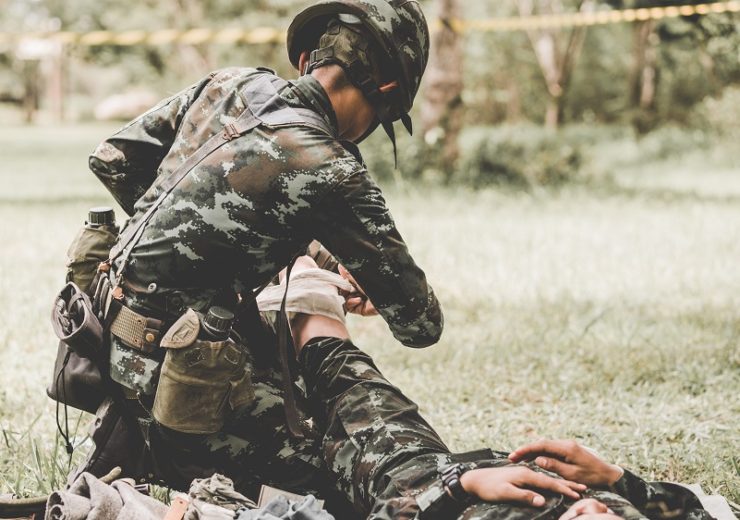 A US military agency believes closed-loop smart bandages could improve outcomes for the victims of blast injuries in the process, and chronic wound sufferers thereafter (Credit: Shutterstock/635323256)

The interest in using smart systems that can monitor, report on and possibly even influence the healing process is intensifying by the year. Now that the US Department of Defense is launching a project to support wounded soldiers with the dressing technology, Tim Gunn talks to programme lead Paul Sheehan, wound care expert Professor Michael Clark and smart bandage engineer Hossein Derakhshandeh about the world’s prospects for tackling the “silent epidemic” of wounds.

We don’t like to think about chronic wounds. It’s a long-standing trait. On their way to Troy, the Greeks marooned the snake-bitten Philoctetes, “burning flux oozing from the heel of his louse-ridden foot”, on a deserted island because he was putting them off their prayers and sacrifices. The infection his only companion, he remained there for a decade.

An odd three millennia and a few different models of reality later, chronic wounds affect 2% to 3% of the population of the developed world. They cost the UK’s NHS about as much as obesity-related diseases but attract scarcely a fraction of the media coverage. Evidently, no one much enjoys being reminded of the unsightly, unpredictable ways their skin can expose and let them down.

We are all, however, suckers for things we can prefix with the word “smart”. Over the past 15 years, TVs, phones, kettles, tables, boilers, mirrors and more have all felt our passion for integrating information technology into everyday objects.

Benefits of a smart wound dressing

Now one of the oldest human innovations of all, the humble wound dressing, is taking its turn in the smartlight. Soon, wounds may well be managed with dressings that automatically convey their condition to clinicians, or even intervene to facilitate the healing process.

It’s easy to see why we might want to smarten our approach to chronic wound care. According to the UK’s National Institute for Health and Care Excellence’s (NICE) guidance on leg and foot ulcers, a Doppler ultrasound is the necessary first test for reaching a diagnosis and determining the right treatment.

A study published in the BMJ in 2015 showed that only 16% of patients suffering from these conditions received one. Almost twice as many patients were unable to get a differential diagnosis as were given the right test.

“For many GPs, it’s an area where they have minimal experience, so it becomes an issue for their practice nurses,” explains Professor Michael Clark of the Welsh Wound Innovation Centre, the first of its kind in the world. Any patient who spends a long time in hospital could well develop a non-healing wound.

“There just isn’t a label on a door that says this is the right route for difficult cases,” says Clark. As such, Clark believes that the “silent epidemic” of non-healing wounds won’t be tackled without parallel work across three areas.

The first task is communicating the basics of wound care to busy clinicians; then researchers need to devise diagnostic tests that can indicate the likely outcome of any wound; and finally engineers need to integrate those tests into sophisticated technologies that can both monitor and intervene in the wound-healing process.

Hossein Derakhshandeh, a researcher and engineer at the Laboratory for Innovative Microtechnologies and Biomechanics, University of Nebraska, is doing just that.

In his view, the impact smart bandages and wound dressings can have on non-healing wounds comes down to the fact that “for many reasons, chronic wounds become trapped in the inflammation phase of healing”.

To use his patient simplification, in these cases a range of factors result in the body’s “smart” response being interrupted, which means “closed-loop smart dressings have the potential to manage the healing process instead”.

This is the truly revolutionary promise of the smart dressing. It’s a way to move from a more passive model of wound management, where clinicians put the body in the best position to heal, past static, healing-enhancing scaffolds like hydrogels and bioglasses, to a dynamic and active paradigm, where the healing process can be directed by precise interventions.

A smart wound dressing could help in recovery from blast injury

Philoctetes had long since given up hope of his foot healing when his comrades finally came back. They identified his cave by the pus-infused rags he’d left to dry outside. It wasn’t a charitable visit.

The Greeks had discovered that the war could only be won with the bow and poisoned arrows bestowed on Philoctetes by Hercules, and they planned to steal them. In one telling, Neoptolemus, the son of Achilles, called up after his father was slain by an arrow to the heel, was entrusted with the task.

It all came far too late for Achilles, but over the past 250 years, medical advances spanning everything from modern nursing and antisepsis to the concept of triage have been spurred by warfare.

Now, the US Defense Advanced Research Projects Agency (DARPA) is launching a Bioelectronics for Tissue Regeneration (BETR) programme that it believes will put closed-loop smart bandages on that list, improving outcomes for the victims of blast injuries in the process, and chronic wound sufferers thereafter.

As Paul Sheehan, programme lead for BETR, puts it, “There’s no evolutionary precedent for a blast injury.” No Homeric character had their legs amputated above the knee; their pelvis fractured; their hands and genitals mutilated; and soil driven deep into soft tissue wounds all across their body by an improvised explosive device.

“We don’t exactly know why,” continues Sheehan, “but blast injuries tend to scramble the physiological processes.” This results in complications like heterotopic ossification, where bone grows through the soft tissue – which takes place after more than two thirds of blast injury amputations – or wounds from amputations that give the impression of healing well until, in Sheehan’s words, “they just start to fall apart”.

The BETR programme is designed to integrate the disparate technologies and types of expertise required to tackle the challenges presented by such an injury.

Not only does it need to implement advances in biosensors, actuators, artificial intelligence and machine learning, it needs to account for the fact that each individual wound is a complicated and heterogeneous environment, and areas that may respond well to a particular treatment are often crosshatched with others that might not.

Derakhshandeh puts it in terms of chronic wounds. “The biggest problem is that there are many reasons and many factors preventing healing, and we need to take care of each at a specific time with a specific material.”

For Clark, making sense of that heterogeneity across both time and space is one of the main challenges intelligent dressings will have to face. Before then, it would help to work out which of the signals we can get from a wound are worth our attention.

“You’re almost limited by your imagination in terms of what you think you can measure at the wound surface,” he explains. “The challenge comes in identifying which parameters are actually providing useful information.”

“Ultimately,” sighs Clark, “if you’re looking for the missing piece in much of wound healing, it’s our lack of diagnostic tools.”

Both he and Sheehan agree that experienced clinicians can intuitively identify roughly where a particular wound is in the healing process, but there is presently no clear way to identify which wounds will heal easily, which ones require extra effort, and which are likely to get stuck along the way.

For Sheehan, this is what makes smart bandages a perfect project for DARPA, which prides itself on its ability to bring together several fields on the cusp of major breakthroughs and help them push towards a specific capability.

One of the key fields here is machine learning. Sheehan believes facilitating and advancing wound experts’ intuitive understanding by sorting and identifying the most critical pieces of data resembles “a classic machine learning programme, taking in many different signals and merging them into a more robust quantitative one”.

“What we discovered when researching to set up this programme was that many of the efforts to date have been stovepiped,” he continues. “Everyone was doing great research in their small mechanistic worlds, but we wanted to step back and say, ‘If you could do anything, if you were to pick the most critical processes, what would they be? How would you control them? And how would you put it all into a system?’”

Being a mythical character, Philoctetes was already part of a system. What’s more, in the ancient play that bears his name, his salvation actually comes courtesy of a machine. Just when it seems there can be no solution to the onstage drama, a crane whirs into life, bringing Hercules down from the heavens, deus ex machina.

The deified hero quickly convinces Philoctetes to go with his countrymen to Troy, where he will be healed by the sons of Asclepius, god of medicine, and help win the war. The rest is well-known, if not quite history.

However fervent the hype might get, machine learning and artificial intelligence do not exist to bring us closer to the gods. They are, however, central to making a closed-loop intelligent dressing possible.

Take heterotopic ossification, for instance. “That would be an example of an abnormal system,” says Sheehan. “Our goal is to be able to monitor it and use machine learning to develop a vision of what normal healing should look like and then try to steer the wound back onto that pathway.”

“That also fits into a classic machine learning programme,” he continues. “You do not have to specify every process that is going into healing – AI can take the signals that are there and indicate that there’s a missing process we don’t know about, and sometimes even provide control without knowing every single piece of information.”

Nevertheless, BETR will need to build up this capability with a far sparser data set than a typical machine-learning programme. Sheehan’s team also have to consider the method of drug delivery. The answers there are still to be determined, though Derakhshandeh speaks cryptically about an upcoming breakthrough.

“We’re about to publish some results that I think will open a new door, not just for chronic wound healing, but for burns and cosmetic issues,” he says carefully, weighing every word. “It’s possible that our method of delivery has changed that. We have changed the hypothesis and tried to bypass some barriers in the wound.”

Similarly, Clark sees a lot of potential for a smart bandage that works to facilitate wound management by regulating the amount of pressure applied in the vicinity of a leg ulcer. It’s a more traditional method that doesn’t rely on administering treatments to the wound surface, but it’s still a long way from today’s bandage.

Whatever technology might be installed in the bandages of the future, and however impressive it might prove, it will not be a panacea. As Clark puts it, “We need to get clinicians to do the right things, the simple things, consistently.”

If we can’t do that, costly smart bandages are likely to be misused, and patients will continue to suffer. Indeed, Philoctetes’ ordeal came to an end because Neoptolemus paid attention to him. With more than 30% of today’s chronic wound sufferers also experiencing depression and anxiety, we would do well to follow that example.