What will US healthcare look like under the five front-runners in the Democratic Party leadership race? 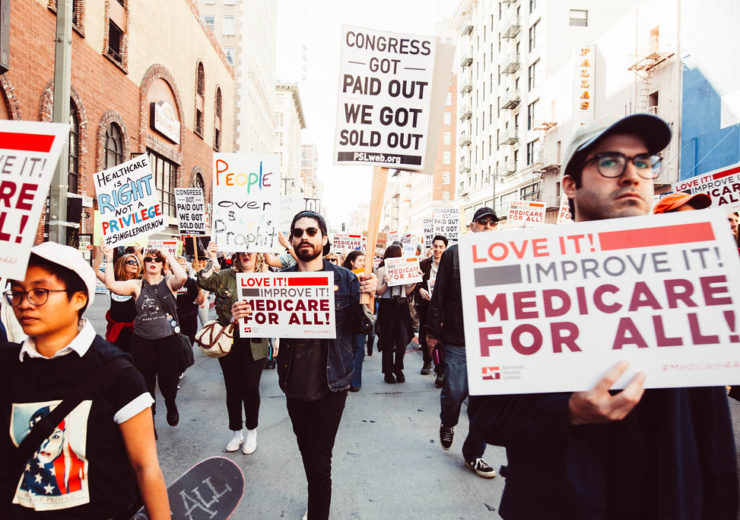 Many US citizens and politicians consider free universal healthcare — dubbed 'Medicare-for-all' — to be a basic human right (Credit: Molly Adams/Flickr)

With the US presidential election taking place on 3 November 2020, questions have been raised over what the American healthcare system could look like under a Democrat leader.

Currently, Medicare entitles all citizens aged 65 and over to state-subsidised health insurance.

This coverage also applies to people of all ages with certain permanent disabilities and long-term illnesses — such as end-stage chronic kidney failure.

In 2010, the Patient Protection and Affordable Care Act (ACA) — often referred to as Obamacare — was enshrined in US law by President Barack Obama.

The primary intention of this was to make healthcare more accessible and affordable for American citizens, but over the past decade, it has drawn widespread criticism from Republicans, as well as some Democrat politicians.

NS Healthcare takes a look at how the five leading candidates in the Democrat Party leadership race will build on — or completely change — these policies if elected president.

He lost out to Hillary Clinton in the contest — but his Medicare-for-all policy was well received by many, and he is once again seeking to make all Americans eligible for state-provided free health insurance as the 2020 election approaches.

Currently, several different groups cover healthcare in the US — including the federal government, private insurance companies and employers.

Sanders’ proposed Medicare-for-all bill would mean the government alone provides this coverage using taxpayer money. This is referred to as a “single-payer” programme.

As well as being expanded to apply to everyone in the US, Medicare-for-all would also cover a wider range of benefits, such as long-term care and more types of prescription drugs.

While many Democrat supporters and politicians support the notion of universal healthcare in the US, the practicality, and affordability, of implementing such radical change has been questioned.

Medicare-for-all would effectively wipe-out private insurance companies in the US by making them redundant for everything except the most expensive prescription drugs, and procedures patients choose to undergo such as cosmetic surgery and laser-eye treatment.

Sanders estimates the plan would cost the government about $14tn over the next decade — requiring substantial tax increases. Economic experts have claimed it would cost closer to $30tn.

Warren, 70, has also repeatedly endorsed the idea of Medicare-for-all in the US.

However, the Massachusetts senator’s plan to implement universal healthcare is more gradual than Sanders’ approach.

Warren has said she will begin her first term as president by passing a bill providing free health coverage to children and people with lower incomes — as well as allowing  Americans over the age of 50 to choose either state-provided or private healthcare.

In giving US citizens this choice, it is seen as an expanded version of a “public option”, which is key to the health policies of more centre-left Democrat candidates such as Joe Biden and Pete Buttigieg.

She will also fast-track legislation to “reign in” drug companies and bring down the costs of prescription medicines if elected president.

Only later on in her first term — during her third year in office — would Warren pursue full-blown Medicare-for-all and essentially close down private insurers in the US.

She has also emphasised the need to tackle mental health, drug abuse and addiction, and protect access to healthcare in rural communities.

Warren claims her system will cost slightly less than the $52tn price tag to maintain the current Medicare system over the next 10 years — and provide the entire population with free, extensive health coverage.

If he is elected president, it will mean all American citizens can opt-in to an “affordable, comprehensive” public alternative to private coverage.

This differs from Sanders’ traditional Medicare-for-all policy by providing a public option, giving people a choice between remaining with existing private insurers, and switching to a government-provided plan.

Buttigieg says this public option will be available to everyone, and provide benefits at least as generous as private alternatives.

The idea behind it is that private insurers will therefore be priced out of the market unless they reduce their prices, making health insurance available to a wider percentage of the US population — but particularly those on lower incomes.

Buttigieg has also emphasised the need to improve the quality of healthcare in the US — and says care should be easier for people to access.

He estimates that this will cost $1.5tn over 10 years — the vast majority of which will be generated by undoing Donald Trump’s corporate tax cuts.

He will also attempt to put an end to patients receiving surprise medical bills from profit-driven private firms.

Buttigieg, who is the former mayor of South Bend, Indiana, originally supported Sanders’ more radical Medicare-for-all approach when he entered the presidential race in January 2019.

Minnesota senator Klobuchar, 59, wants to provide universal healthcare to American citizens — and she sees expanding the existing policies of Medicare and Medicaid as the first step in doing this.

She has spoken about expanding the health insurance coverage of these policies, and providing a public option similar to other Democrat candidates — which would mean private insurers are not wiped out.

The public health insurance option would also bring prices down for consumers and allow more people across the country access to coverage.

Klobuchar’s proposed changes to the Affordable Care Act include providing cost-sharing reductions, making it easier for states to put reinsurance in place, and continuing to implement delivery system reform.

Another key aspect of her health policies is reducing the price of prescription medicines by lifting the ban preventing Medicare from negotiating drug prices, allowing people to import safe drugs from other countries, such as Canada, and stopping pharma companies blocking cheaper alternatives to their drug products.

Klobuchar has also said that, as president, she would prioritise early intervention and treatment for addiction and substance abuse, as well as mental health.

In the past, she has also indicated that some form of Medicare-for-all “could be a possibility in the future”.

As of February 2020, Klobuchar has not said how much her plan would cost — or how she plans to pay for it.

Former US vice president Joe Biden, 77, was at President Barack Obama’s side when he enshrined the Affordable Care Act into US law in 2010.

Now, running for the Democratic Party nomination, he has continually emphasised his intention to protect and build on “Obamacare”.

Rather than eradicating private insurers, Biden wants to do this by giving Americans more choice, reducing healthcare costs, and making the US healthcare system less complex to navigate.

He plans to end President Trump’s reversal of the perceived progress made by Obamacare, and eventually intends to insure more than 97% of Americans.

He has said he’ll do this by expanding healthcare coverage, lowering premiums, and, crucially, introducing his own “Biden Plan”, which will reduce costs for patients by negotiating lower prices from hospitals and healthcare providers.

Americans will have the option to buy into this plan if they are unhappy with what private insurance companies are offering.

The Biden Plan also prioritises loosening the stranglehold drug corporations have over the price of prescription medicines in the US.

Biden has estimated his policy will cost the government $750bn over the next 10 years.