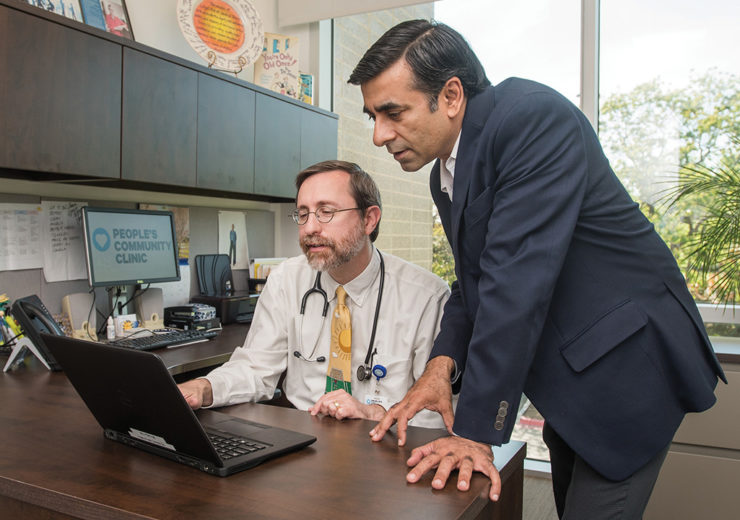 From predicting which new mums are most at risk of dying to keeping homeless people’s health records up to date with blockchain, Dell has been dipping its toes into the healthcare world.

Although best known for creating computers and data centres, company founder Michael Dell’s charity helped set up Dell Medical School at the University of Texas in his Austin hometown three years ago.

The school is working with industry partners to test how new technologies can change patient outcomes in a range of health issues.

Dr S Clairborne “Clay” Johnston, dean of the school, says new innovative techniques are needed because in countries like the US where, despite spending 30% more on healthcare than any other nation, patient outcomes are closer to those in developing countries like Costa Rica and Cuba – with life expectancy on the decline.

“We don’t focus adequately on patients and outcomes,” he said at the Dell Tech Summit in Austin, Texas, last month. “We don’t measure or acknowledge them enough and that’s why it’s important for us to work together.

“We also fail to recognise that we want health, not healthcare – we should be investing more on prevention and outside the healthcare system because 80% of outcomes occur outside this.

“Technology isn’t having the same impact on healthcare that we’ve seen in other industries, despite the huge amount of data we’re creating.

“In our approach, we try to identify the problems that really matter to health and then look for the solutions – which might be lo-tech or hi-tech – rather than trying to figure out where to plug in some new innovation.”

With this in mind, Dr Johnston – an award-winning researcher and teacher who has authored more than 300 publications in scientific journals – outlines to NS Healthcare five innovations Dell Medical School has led.

According to the US Department of Housing and Urban Development, there were about 553,000 homeless people on the streets of America on any given night in 2018.

It’s a pertinent issue in the US – like in many other countries, with about 150 million people estimated to be without shelter globally – and Dr Johnston claims it can also cause problems in hospital emergency rooms because there is no integrated system for keeping healthcare records of homeless people, who visit more frequently than on average.

He says: “There’s no record about how they were admitted two days ago with a similar problem, how they have a history of allergies or that they’ve been treated for a chronic condition previously.

“They need to reinvent the records and it’s a case where you can’t expect the homeless person to be carrying around a pack of paper documents or able to recite from memory.”

A team at Dell Medical School has been given a grant from Bloomberg Philanthropies to explore the use of blockchain technology – the decentralised, distributed ledger technology that is effectively a database recording transactions across numerous computers so archives can’t be changed or deleted without the alteration of all subsequent blocks.

It has been advocated for other use cases in healthcare, such as adding transparency to pharmaceuticals, and Dr Johnston believes it could act as the repository for critical records produced at a hospital – and integrating them through blocks.

He says: “At the moment, even for people who are insured in the US, all the integration happens by a doctor asking a patient where they were last seen by another clinician, getting them to fill out a form saying the patient is willing to have their records released, and then faxing them over to another hospital system.

“Eventually, the patient will eventually get a paper version of those records as a discharge summary.

“In homelessness, they’re more frequent users of emergency rooms, are less likely to have co-ordination and have a lack of continuity.

“We’ve demonstrated how blockchain could work effectively and have a clear notion of what’s required.

“But to roll it out more broadly will take larger investment that will have to come from federal, state or a new company that can be created to fill that gap.”

Artificial intelligence is being deployed with the primary goal of identifying pregnant women who are at high risk of stillbirths, as well as new mothers who could during or shortly after giving birth, in order to adapt care plans.

And while the infant mortality rate declined from 6.75 per 1,000 births in 2007 to 5.79 in 2017, it remains higher than many other developed nations like Canada, Australia, New Zealand and most European countries.

Dr Johnston explains: “There are known complications – some have to do with race or economic status – but we don’t know all the risk factors and don’t do a great job of predicting who’s at risk.

“This was identified as a problem because US rates of both infant and maternal mortality are really high.

“It was a priority for us and it made us think about how to alter our approach.

“You can throw in a model that makes sense from a scientific point of view but AI can find factors you’d never have anticipated.”

The Dell Med team created a model that used a set of algorithms to analyse mothers and their babies across a range of variables.

An example of what the researcher learned was that maternal mortality was associated with prescriptions for opioids at the time of discharge from the hospital shortly after delivery due to the risk of unintentional overdoses.

“It appeared that – although we were providing treatment to reduce pain for women who had caesarean section deliveries or some trauma at birth – in our attempt to reduce pain, we were actually creating addiction,” says Dr Johnston.

“The addiction was then leading to accidental overdoses in some cases within a year.”

Most people with asthma – a common condition in which a person’s airways narrow and swell, producing extra mucus that can make breathing difficult – won’t go anywhere without carrying an inhaler.

But rather than relying on the daily and “rescue medication” that’s currently used to treat it, Dell Med believes asthma attacks could actually be prevented by using technology.

Working with the Austin-based People’s Community Clinic, the school’s researchers have developed a data-driven approach that gives care teams a fuller picture of child patients’ health.

They have built a system that integrated non-medical information like weather, air pollution and pollen count into a patient’s electronic medical record.

It helps clinicians understand how issues such as exposure to smoke and pollen, housing conditions and transportation accessibility – which research suggests influence more than 80% of a person’s overall wellbeing – could lead to an asthma attack.

Dr Johnston says: “Our goal is to get the data to predict who’s most at risk and then try to prevent it by providing the best treatment within a few hours of it happening.”

In the US, physician burnout costs the healthcare system about $4.6bn per year, according to a study by the Annals of Internal Medicine published earlier this year.

Dr Johnston, a neurologist who specialises in stroke care, says the major complaint among American doctors is the paperwork burden associated with health insurance billing and reimbursement.

A solution could be found in artificial intelligence, he believes, after Dell Med created a speech recognition bot that could listen into clinic conversations and automatically fill in relevant parts of electronic health records and contact patients to arrange follow-up appointments.

“It means the physicians are much more likely to be efficient and will therefore improve patient outcomes,” says Dr Johnston.

“All the things they have to do at the moment weighs heavily on someone who takes their job seriously.

“The best physicians are focused on improving outcomes for their patients but when they also become billing machines, it leads to burnout.

“So AI has great potential to improve that by calculating reimbursements and measuring outcomes.”

Innovation doesn’t always have to involve technology, as demonstrated by Dell Med’s rethinking of the traditional outpatient waiting room to make it more patient-friendly.

According to Dr Johnston, the average waiting time in doctors’ surgeries in the US is about 40 minutes, while the average visit time is 12 minutes – and less than 10 minutes for patients with some types of chronic disorders.

“People are waiting for nearly four-times as long as their appointment, which in itself isn’t huge but it’s showing disrespect for people because their time is important,” he says.

“And this is happening because of inefficiencies in the system, so it’s saying the provider is the important one – not the patient.

“It’s not well designed so our project was about completely redesigning the system so the waiting room wasn’t part of it.”

Rather than sitting in a waiting room when they arrive, patients walk into a surgery and go straight into a “patient room”.

It features bench seats for them to rest with their feet up and instead of seeing just one doctor, patients will be visited by various practitioners to create a better workflow for staff.

By freeing up space in the waiting room, it also means more visiting rooms can be created.

Dr Johnston adds: “For some things it works incredibly well and for others we’ve modified it for specific users.

“But it’s most successful in reminding our patients that we’re there to do this in a better way.

“They’re waiting less time because rather than waiting around for different staff, whoever is available first will go see a patient, as long as it makes sense.”

Pre-exposure Prophylaxis: A closer look at the treatment driving declining HIV transmission in the UK

What is ZipStitch? The do-it-yourself device for closing wounds quickly wherever you are