The convenience, configurability and ruggedness of tablet devices are enabling businesses to become more efficient and effective by empowering their front-line employees with data and applications on the move. We talk to Andy McBain, head of regional product management EMEA, Zebra Technologies, about the decisions organisations must make in order to choose the right solution. 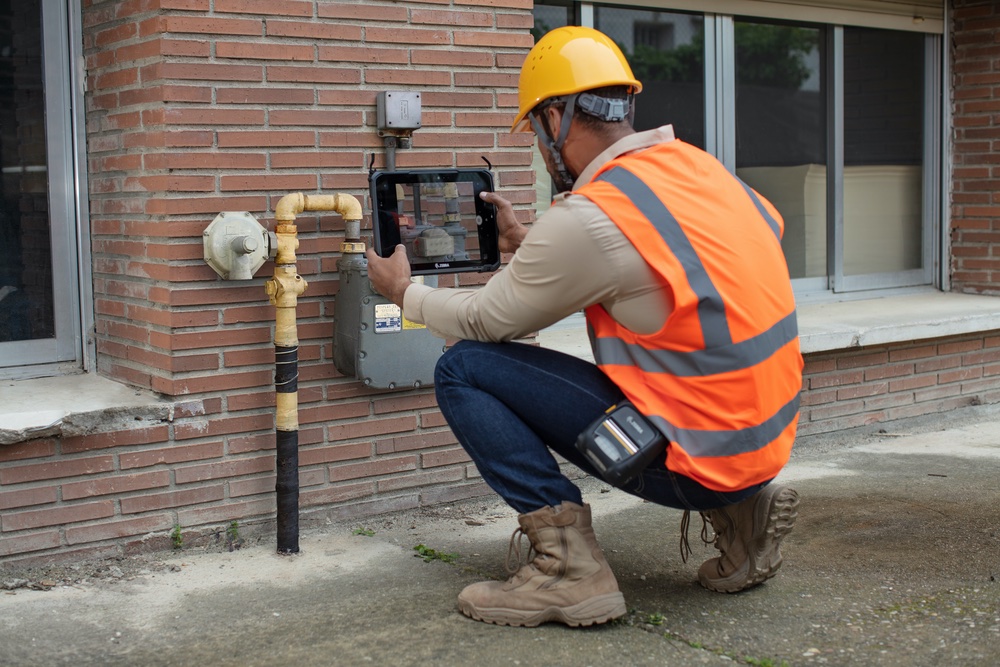 Field operations application: a utility-worker taking a photo of a gas meter via the ET8x. (Credit: Zebra Technologies)

Tablet technology has steadily become a mainstay of enterprise operations and field workers, warehouse employees, front-line medical staff and the thousands of other employees who rely on them to do their jobs effectively. However, there is no one-size-fits-all enterprise tablet solution. Finding the right combination of hardware, operating system and form relies on an in-depth process of investigation and analysis.

“We look at the workflow of each user,” says Andy McBain, head of regional product management EMEA at Zebra Technologies. “We look closely at how people do their jobs. Any assumptions we make could get in the way of developing the right product.

“We speak to people across the business about what they need and how they work, taking a ‘day in the life’ approach, whether it is a driver, a field engineer, a worker in the warehouse,” he adds. “Then the industrial design team takes over to determine what is the best tablet. We define everything, including where the buttons go, on the basis of how someone holds the tablet while doing their job and what they need the device to do.”

With more than 10,000 partners across 100 countries, Zebra provides better visibility through industry-tailored, end-to-end solutions that leverage industry-leading hardware and software to give organisations in a wide range of industries a competitive edge. This is done by ensuring that every asset and worker on the edge is visible and connected to the data they need to operate effectively.

At the core of this offering is a family of tough, reliable and purpose-built tablets that suit the specific needs of each user and power their job performance.

With the thin, lightweight and rugged ET8x Series of 2-in-1 or stand-alone tablets, the ET5x Series of tablets with 8in or 10in screens, and the fully rugged L10 Series for mobile workers, Zebra has a suite of solutions that support workers in public safety, retail, hospitality, warehouse management, healthcare, manufacturing, field mobility and transportation.

“We try to make our tablets as generic as we can to fit as many applications as possible, but there are exceptions for specific industries,” says McBain. “Take pharmaceuticals for example, where the ET8x’s fan-less redesign reduces the release of particles into the air better suiting it to cleanroom environments.”

Perhaps the most critical element in the customisation of a tablet, however, is the choice of operating system (OS). Often this comes down to a choice between the ever-present Windows OS and the mobile-ready Android. Which one a client chooses will depend on a range of factors.

“The choice of OS comes down to the application and the workflow,” McBain explains. “A utility worker, for example, may have had some form of laptop – possibly a Mac, though more likely Windows. A gas engineer may be used to using Windows applications – and if there is a team of tens of thousands of field workers, it is expensive and time-consuming to migrate applications to a tablet running Android.

“Government bodies and long-established companies tend to prefer Windows, so we migrate those applications to a tablet,” he adds. “If I were a user with a history of using PDAs and smartphones, I would be used to using customised applications written for me. So, we can migrate those Android apps to the tablet.”

There are many pros and cons for each OS. For instance, the Windows processor is more powerful than Android, and Windows is the most used operating system in personal computers, while Android is the most widely used OS overall. Windows is designed primarily for workstations, personal computers, media centres, tablets and embedded systems. Conversely, Android is specifically designed for mobile devices.

“Windows has migrated to be more mobile-friendly, but I don’t think it is a fully mobile OS,” McBain remarks. “Windows SE never took off for tablets, but the latest version of Windows has reportedly made big steps forward.

“Windows CE, which was designed for use within the four walls, went end of life and triggered warehouse movement to Android, but field ops didn’t need to do this,” he notes. “Field operators have Windows in their back-end offices and want more than a phone, which is why Windows still works for many. Professional-grade Windows tablets offer speed, intelligence and security and are engineered for good wireless and longer battery life.”

In the future, the fact that Android is open source could be increasingly significant, as it allows anyone to dig into the OS and create apps, whereas Windows is closed source with tighter security.

An informed choice of OS

Zebra is the leader in Android-to-enterprise solutions and was once committed solely to that OS, but its acquisition in 2018 of Xplore Technologies secured its commitment to Windows.

“We spent millions to make Android an enterprise solution,” McBain notes. “We have the utilities to allow customers to tailor Android to their specific needs. Android has more configurability and there are things we can do with it that we cannot do with Windows, which does not allow us to hack parts of its functionality.

“The acquisition of Xplore Technologies commits Zebra to Windows and gives us a wider family of tablets,” he adds. “It gives us the Windows element where we had been focused on Android before.”

Now, the balance of Zebra tablet sales is 50/50 between Android and Windows, but there is a transition under way between the two operating systems in some industry sectors.

“In healthcare, there is a high rate of Windows adoption, but Android is becoming a much bigger piece of that market because new applications can be written for it more easily,” McBain observes. “In the utilities market, the regulated element of the industry means that Windows is still the preferred OS. Everything depends on the specifics of each industry.”

Enterprise-grade Android is now ready, complete with enhanced security features. Android tablets have now been developed to be rugged, so they are tough enough for field usage. There is no longer a simple choice between big tough Windows, or cheap, small Android devices. Nevertheless, with Zebra’s comprehensive approach to analysing customers’ needs and its advanced design capability, the right choice is now much easier to make.